The other day I mentioned to someone that no one was commenting on my blog posts. I am not sure if the information is relevant for the people who visit the site, or that anything I have written is really that interesting. The person asked if people who visited the blog knew there was a way to comment. I looked at the site and realized that the only way to know is that there is a link at the bottom of the posting that registers how many comments have been submitted. If you click on that link, you can submit a comment. Please feel free to comment on this blog by clicking on the link. Make sure the comments are germane and not offensive. Thanks.
Posted by Andy Lent at 8:54 AM No comments: 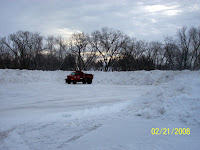 This past week I attended our Lions Club meeting and sat across from the person from the Iowa Braille School who is liaison with the AmeriCorps program. He quickly rattled over a list of items that will need to be completed before July when the contingent of volunteers arrive at the school. It seems like a daunting list of tasks that need to be completed, but he is very optimistic about completing everything. For our part, the city has almost continuously been digging out of the snow. I have included with this post a picture of the snow that the street department has been taking out of the downtown area and piling at the old brush dump. While we hope that spring comes soon, we hope the snow doesn't all melt at once. It that happens we can expect the Cedar River to rise and present some flooding problems. Fortunately, we have several sandbags on hand, a nearby quarry to get sand, and some available labor to fill the bags. With any luck, it will not come to this, but we need to be prepared!
Posted by Andy Lent at 9:43 AM No comments:

Sheltering From The Storm

It may be a little early to be thinking of tornadoes, but if anything has taught me lately it's that tornadoes can strike at anytime of the year. A couple of years ago, tornadoes occurred in November in central Iowa and just last month in Arkansas and Tennessee where my sisters and parents live.
The city's former city coordinator, Don Martin, started planning for a community center and storm shelter in the city's Maple Lane subdivision. The structure would be used by those living on Q Avenue (Maple Lane subdivision), residents of the new Windsor Manor assisted living center, a 12-unit senior apartment complex and a 40-unit mobile home park. All of these homes are built on slabs or lack sufficient protection in case of a tornado or windstorm.
The city applied for and received a $189,000 grant from FEMA towards the cost of the storm shelter portion. I think this is only fitting since Don worked for FEMA prior to coming to Vinton.
Last night, the city council approved the bid for the storm shelter and we expect construction to start in March or April. We hope the community center will be used more than the storm shelter, but it will be there if it is needed!
Posted by Andy Lent at 1:06 PM No comments:

I remember the day I first stepped into Vinton, Iowa. It was Friday, May 5, 2006. I had been selected to interview for the position of city coordinator. I decided to stop by on that day so the current city coordinator, Don Martin could give me a quick intro tour of the city. Don was retiring due to health concerns. He dropped everything he was doing at the time, hopped into his truck with me and showed me around town. The passion and emotion he felt for the city where he worked for the past 16 years really came through to me. After I was hired, Don and his wife Donna opened their home to me and offered a place to stay until my family and I found a house.

Don passed away this morning. Although I did not know him as long as everyone else here, I will really miss him. There is a strong bond that develops between members of a similar profession, and I know it existed between Don and me. He managed this city very well and helped bring about many of the improvements that exist here today. I will always be grateful for what he did for me and this city.
Posted by Andy Lent at 12:20 PM No comments: