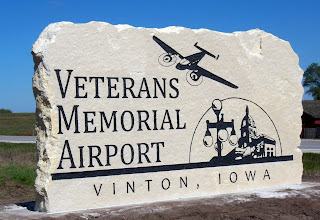 The Vinton Veteran's Memorial Airport Commission has been moving right along with making improvements to the airport and, with some help from the city's airport engineer from Clapsaddle-Garber in Marshalltown, has been able to secure grant funding for the improvements. Today a new entrance sign was installed to replace a wooden one that had stood at the entrance for many years. This picture shows the sign shortly after installation. Landscaping and lights will be added later. An open house is scheduled for Friday, October 30 as the Commission hosts the Vinton Unlimited After Hours.
Posted by Andy Lent at 12:42 PM No comments: 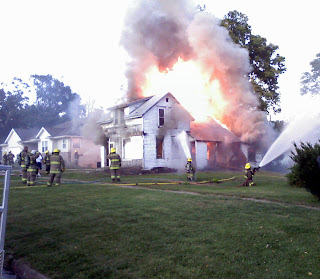 By state law, a city fire department can have three fire trainings per year where a structure is intentional set on fire and the department personnel train to combat the fire. The City of Vinton Fire Department did this last night. In the words of my daughter--it was awesome. But even better was the chance to see the firefighters in action and the careful but deadly force they use to put out a fire. They also had a chance to try out an aerial ladder truck that may soon become part of the city's fire fighting arsenal. Check out more pictures by clicking here.
Posted by Andy Lent at 2:17 PM No comments: