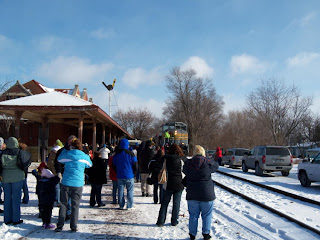 This past weekend, the Iowa Northern Railway donated the Hawkeye Express train to make four trips between the City of Palo and the City of Vinton. The event was originated by a couple of residents in Palo and organized with the Benton County Disaster Recovery Coalition to raise money for flood victims in Palo and Benton County. Despite the cold temperatures, many people participated in the rides. This helps to add to the discussion about restarting passenger rail service in Iowa besides the Amtrak line that runs through the southern half of the state. I worked at the Vinton Lions trailer that was parked next to the Vinton Rail Depot--it was great to see the old, restored depot being heavily used again for its original purpose!
Posted by Andy Lent at 11:27 AM 1 comment: